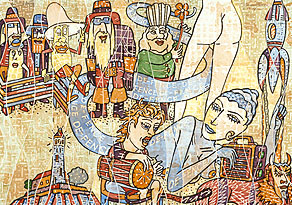 Would Postmodern Art By Any Other Name
Be More Accessible?

A Political Perspective: The Etymological Issue with "Postmodern Art"

Puzzled over the controversy as to whether "postmodern art" is useful or misleading as a descriptive term? On one hand, some use the term "postmodern art" to mean a rejection of 20th century rationalism—"in essence, a return to the metaphor of the body rather than that of the machine; the return of a belief in and tolerance of the irrationality of human beings."1 On the other hand and in a broader sociocultural context, others object to the word's etymology on the political grounds that "modern" could hardly be prefixed by "post-" until the rational ideals of democratic liberty, equality, and fraternity underpinning the revolutionary spirit of modernism have been fully realized. For the earliest and most celebrated expression of these ideals in a painting, look at The Third of May 1808 by Francisco Goya, The Prado, Madrid. This masterpiece records Goya's impartial reflection on the horror of war while the world shifted from monarchies to modern republics under the sway of Napoleon. In the context of such political critique, the term "postmodern art" is etymologically contradictory, thus premature, and carries the negative connotation of stylistic indulgence by affluent and intellectual classes.

The Nuanced Use of "Postmodern Art" in Art Theory

For the reader determined to delve further into the controversy over "postmodern art," read on. In art theory, the descriptive value of the term depends on how one defines modernism. Some view modernism as a monolithic movement that gave birth to a plethora of isms. Others would argue that Duchamp's philosophical critique of art launched a new trajectory that will not exhaust itself as long as humans will produce works of art. In other words, the critique of art as art will go on as long as new works of art emerge. At the onset, modernism was generally propelled by a need for emancipation—to free art from aping the world of appearances with a language and raison d'être all its own. It more or less developed from Goya though Manet, then Cézanne. Early mid-twentieth century modernism bifurcated into two parallel trajectories: one, the progressive reduction of art to its various essences like Mondrian's elemental grids, Rothko's color effusions, and Pollock's action drips; two, the critical anti-art trajectory launched by Marcel Duchamp. In the first case, strictly conceived as a progressive reduction of art to the blank canvas or empty gallery, modernism reached a dead end, and its idealistic attempt at formal purity gave way to postmodern art. In the second case, whenever one sees modernism as a pluralistic entity that has yet to exhaust the possibilities introduced by Duchamp, the use of "postmodern art" could be misapplied.

"Post-modern Art" in a Nutshell

Romanticism had emphasized the artist as the subject of art before modernism progressively focused on the art object itself. As the social promises of modernism never fully materialized, "postmodern art" found increasing currency in speech and practice in Western societies. Shrouded in theory, "Postmodern art" is a multilayered word. Yet it aptly articulates the general disengagement of contemporary art and culture from modernism and the modernist credo of formal purity as a panacea for humanity.